HIS FEAST DAY AND HIS MANY KINDNESSES

I have always been close to Saint Anthony.  My mom was too.  A little image of St. Anthony holding the infant Jesus hung in a little gilded Neapolitan frame by her bed, and I remember gazing at it and feeling peace as a child.
Today is Saint Anthony's Feast Day.  This is a special day to remember him, to thank him for his many kindnesses, and to simply and thankfully acknowledge his role in your life.

Saint Anthony of Padua lived from 1195 until 1231 AD. He was originally in the Order of St. Augustine, but later became a Franciscan.  He is a Doctor of the Church,.  He is widely recognized as a miracle worker. His feast day is June 13.  As is common with Roman Catholic Saint Feast Days, this is the anniversary of his death.

Throughout my life, Saint Anthony has been close, warm, responsive, and incredibly helpful.  He is known to help those who have lost items or even had them stolen. Whenever I misplace something, I hunt for a few minutes, then stop and ask St. Anthony for his help. Virtually always, the lost item turns up in very short order.

A little while ago, I worked at a gala benefit for Habitat for Humanity. The event was held at a local museum. As I was setting up prior to the arrival of the crowd, one of the museum staff, knowing that I was a reader, asked me if I had any idea where she could have left her keys. She'd been looking for them for three days, and had been incredibly inconvenienced by their loss.

I asked her if she'd asked St. Anthony to help her find them. She gave me a funny look, and said, 'No, I didn't think of that. My mom would have told me to do that." "Do it", I urged her. "St. Anthony is incredibly good at finding things."

She walked off to continue getting ready for the event. A couple of minutes later, I heard a woman shrieking. It was the young lady who'd lost her keys! She rushed towards me, holding up a heavy key chain. "I found them!" She said. She was truly spooked.
She had asked for St. Anthony's help, and as soon as she had done so, she found her keys.

He is very close to us, very kind, and very willing to help. Try asking for his help the next time you misplace something you need. Do so sincerely, and I am sure he will help you.

There are several little rhymes used to ask for his help, such as:

Personally, I don't use rhymes to request his help, but many people do.  Some are very familiar with him, in a friendly way, calling him simply "Tony".

You may use a rhyme, or you can simply call his name, visualize your lost item, explain how important it is for you to find it, and sincerely ask for his aid. Your sincerity is key.  You will find your missing object.

It is my feeling that when a Saint intercedes for us and grants our request, we should give sincere thanks.

Everyone appreciates a thank you, and relationships are not one-sided. A candle and a vase of flowers are always appropriate.


Saint Anthony is also invoked when someone is lost. As a result, many people call upon him to help them reconcile with a lost lover.

The traditional statue or image of Saint Anthony shows him wearing brown monk's robes, holding a bible and a lily, with the infant Jesus in his arms. His expression is usually very tender.

Some St. Anthony statues are made so that the infant Jesus is removable. People have been known to remove the baby from St. Anthony's arms until he delivers to them the person whom they long for.  I have heard of people doing this when asking for other favors as well, for instance finding a job.  But I myself would never do this.  I feel that this type of manipulation of the saint is both unnecessary and rude.


Because Saint Anthony finds lost people, his aid can also be requested when praying for someone who is severely struggling, and who seems to be a lost soul.

Saint Anthony is also recognized as being able to help single people to find a good spouse.  I personally have known of women who have successfully asked St. Anthony's help with this matter; within 12 months, all were happily married.

This process may take a year, and for some, may involve wearing a special blessed silver charm of  St. Anthony, as well as praying and living a good life, and in general, staying open and responsive to the opportunities and people who come to you during that time.

In Roman Catholic iconography, lilies symbolize purity.  One of the stories associated with the lily that St. Anthony holds goes as follows:  on his Feast Day (today!), June 13, 1680, in the church at Mentosca d'Agesco in Austria, someone placed a lily, cut from the garden, into the hand of a statue of St. Anthony.

Miraculously, that cut lily, which should only have lasted a day or two prior to wilting, remained beautiful, full and fragrant, with no sign of browning or wilting, for an entire year!  Further, the following year, two more blossoms grew from the stem, perfuming the entire church with their fragrance.  Lilies remain a perfect gift for St. Anthony, adding beauty and lovely scent to his altar or whenever you wish to thank him for his kindness towards you.

In 1219, Saint Anthony was very moved by the return of the bodies of the first five Franciscan martyrs, priests who had gone to Seville to preach the gospel in Moorish mosques during the Crusades.  Though they were detained and not permitted to preach, the Sultan allowed them passage to Morocco, where they were promptly tortured and killed.

St. Anthony passionately desired to follow
their brave lead, hoping to spread the gospel to the Saracens, and committing himself to the possibility of Christian martyrdom.  With the approval of the Augustinian Order, St. Anthony became a Franciscan monk, and set out across the Mediterranean Sea for Morocco.  However, he became very ill during the journey.  He was persuaded to return home, but his ship was beset by wild winds and storms which blew him off course.  Despite the fierce storms, his ship landed safely in Sicily.

In recognition of his survival, in some countries,
Saint Anthony is prayed to by travelers and vacationers for a safe journey, particularly over
the sea.


According to stories, some sailors  keep a statue of Saint Anthony on the mast of the ship, and appeal to him for safety while at sea. He is the patron saint of sailors and fisherman in Spain, Italy, France and Portugal. 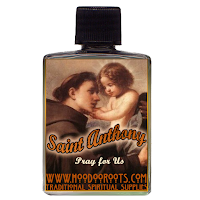 My Saint Anthony formula has been made with love and appreciation for this beautiful saint who has been so truly astonishingly helpful to me throughout my life.  This oil can be used as a personal blessing oil, as well as to prepare candles, in the bath, etc.  It is appropriate as an altar offering, as well.  I hope that you will try this beautiful line!  Available as an Oil, Bath, Powder, and a fully dressed 7-Day Candle.

As always with Hoodoo Roots, the botanicals I use are grown by me without pesticides, sourced from reputable organic growers, or wild-crafted from the purest of areas.  The aromatics I use are 100% botanical in nature; no artificial fragrances are ever used.

May you develop and always enjoy your own lifelong relationship with good Saint Anthony!

Thank you kindly for your interest in the Hoodoo Roots blog! Your comment will appear shortly. All the best to you!
Sincerely,
Dara